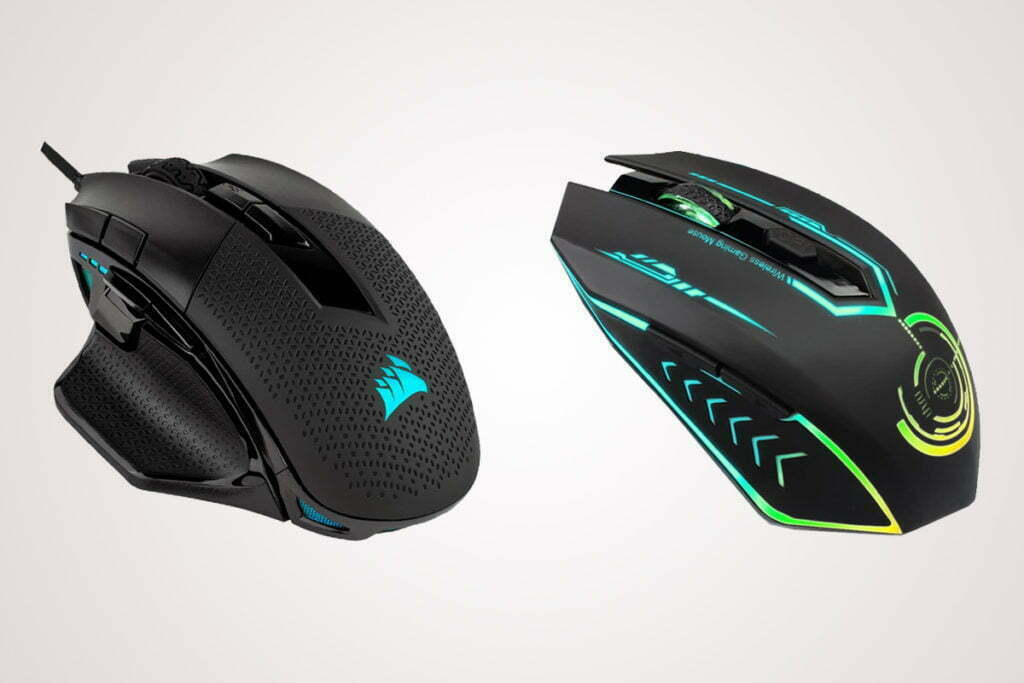 Gamers are pretty much particular about two things – mouse and keyboard. Especially when it comes to gaming, they make sure that the mouse they are using is absolutely quick and responsive. As we all know, there are two types of mice i.e., wired and wireless. While some vote for wired, some others say it should be wireless for them. Well, which mouse is good for gaming and why? If you are someone who is in a dilemma as to which mouse to pick among wired and wireless, read on this article on Wired Vs Wireless Mouse Gaming. We shall give you clarity on which mouse to choose for gaming and why in this article.

Wired Vs Wireless Mouse for Gaming

Though it has been more than a decade since wireless mice has hit the market, the debate on which one is best among wired and wireless is still ongoing. To be precise, both wired and wireless is designed for the same purpose. It is just that the features they offer are little different. It is up to the gamer requirements and interests to choose between the wired and wireless mouse. The type of game also impacts which mouse to pick among the two. As from ages we have been habituated to using wired mice, we may find little difficulty in using the wireless version.

The wireless mice have got many interesting features. The emerging technology knows no bounds and as a result we get to see ultimate features like lightspeed connectivity, unlimited battery life in wireless mice. These features make the wireless mice compete with the wired mice neck and neck. There are few factors that one has to take into consideration before deciding which mouse to purchase. The factors are discussed in this article very briefly and we would like it if you get a quick tour of it.

With different high-performance gaming mice rolling out from various manufacturers back to back, it is difficult to decide which one to choose for the gaming. If you are a professional gamer, you surely need a mouse that works amazingly. With that said, the amazingly working mouse could be either wired or wireless. It is up to the gamer to decide which one fits his/her bill. By differentiating the specs of wired and wireless mice that highly affect the gaming performance, we shall clear the air for you here and now.

Now let us talk about Wired Mouse Vs Wireless Mouse For Gaming. Having wired mouse eliminates the worry of connectivity problems as it is connected directly to the PC through a cable. Also, there is no need to worry about the battery life as it has nothing to do with charging. Coming to responsive time, it is best in that front. On the other hand, wireless mouse has no cable connectivity and also runs on battery. However, this is not a proving point that wired mouse is the best one for gaming. This is because the technology has advanced so much that wireless mouse has emerged as a hot topic in gaming. The wireless version also got tremendous features that make it level pegging in every way.

The thing that is considered odd about wired mouse according to most of the gamers is the cable itself. According to a study, gamers said that they wish they had the freedom of wireless at the cost of performance and reliability of a wired mouse. Nevertheless, it is not just the connectivity that is taken into consideration while investing on a gaming mouse. There are other essential factors to be shed light on.

Let us deeply look into the key differences that wired and wireless mouse possess.

Cable or no Cable

When we refer wired, it means it has a cable. The cable connection translates to a wired connectivity to the CPU. When the wired connection is considered, it comes with no input lag or something similar as the cable is directly connected with the USB port, PS/2 port or even Bluetooth connection. However, if you are okay with the budget and wish to invest on a high-end wireless gaming mouse then latency shouldn’t be a problem there.

The other way round, wireless connection has its benefits. The cable connection may be more prone to physical damage if not seen while playing a serious battle game.

If not connection, accuracy should be given heed to at the least. This is because connection loss may take place both in wired and wireless networks, but accuracy is something that should be picture perfect for any mouse. When it comes to accuracy, DPI comes into picture, which stands for ‘Dots per linear inch’. It is said that the higher the DPI, the faster the movement of the curser and vice versa.

Most of the gaming mice available in the market right now offer around 10,000 to 20,000 DPI. But the big number doesn’t always translate to better accuracy, especially when a very high-end game is on. Too much accuracy in shooting games may fail you in the game as the clicks and movements are quite sensitive. On the other hand, the higher accuracy can help a great deal in moving games. However, the present gaming mice are designed in such a way that the DPI and sensitivity can be adjusted according to the game.

Another important aspect in Wireless Mouse Vs Wired Mouse For Gaming to talk about is charging. It is clear that the wired mouse doesn’t require any charging sort of thing as it is completely powered by the USB port. But that is not the case with the wireless mice which requires charging every often. Professional gamers that sit for hours gaming may suffer a big deal with wireless mice if they run low on battery. The good news is that the latest gaming mice are designed with high charging capacity that lasts for 50 hours maximum.

For example, Corsair Harpoon RGB Wireless mice run for 60 long hours successfully. If you use RGB lighting and optimal wireless connection, it lasts for a maximum of 30 hours. It roughly takes 2 to 3 hours to charge.

When you use a wired mouse, it is obvious that you have to sit near the computer while gaming because it is connected to the CPU. When it comes to wireless mouse, it can be held even 30 feet away from the computer while playing. It means you can relaxingly lie down on your bed and play the game without worrying about latency.

Every day we wake up to advanced technologies and while comparing wired or wireless mice, it completely depends on ones preference. Gone are the days when people used to think about wireless mouse as a disadvantage for gaming. Now, it has got its features that make it stand alongside wired one. We believe that ergonomics needs to be considered while investing on the mouse whether wired or wireless. Hope you are content with the info we have covered here in this article on Wired Vs Wireless Mouse for Gaming. If so, bookmark our website and visit us often to read more informative articles.